skip to main | skip to sidebar


So the question is, where are the birds? Certainly not in the nets last weekend! A stunning total of nine birds were banded on Saturday, with a massive improvement on Sunday, when twelve bothered to show up. Spot the sarcasm here?

Georg left on his hiking expedition to Superior Provincial Park early on Sunday, leaving me to cope with the rush of migrants all by myself......Brett was over at Hawk Cliff on Saturday, banding Red-tailed Hawks, so it was a quiet weekend both bird and human wise. Even "The Ripper" was conspicuous by his absence.

Brett caught 35 birds at the farm location on Sunday, but he's been too busy chasing Le Conte's Sparrows in Guelph to get me the exact numbers, so I will only report my catch....and that won't take long!

Obviously the lack of migration allowed me to spend more time observing birds flying overhead, or feeding amongst the shrubberies. That was less than rewarding too, with a Double-crested Cormorant on the river, along with the customary collected of grotty looking eclipse Mallards, a few Ring-billed Gulls, and back to the vegetation again, the first Ruby-crowned and Golden-crowned Kinglets of the Autumn. The Osprey family have finally bogged off elsewhere, presumably southward, and will not return before late March next year.

Here is the weekend tally, in totally random and confusing order:-

The Red-eyed Vireo was the 50th of the season, and the Philadelphia the 14th. Philadelphia Vireo is not a species that is caught much on the reserve, the previous high being 4, so it would seem that they had a good breeding year and/or I was there at the right time and/or the vegetation is becoming better suited to their feeding requirements as it regenerates, or none of the aforementioned, I was just lucky.........

Next weekend isn't looking too good from the weather standpoint, with showers and a maximum temperature of 10 degrees celsius, so I may just decide to stay at home and watch some Premier League football on the t.v. There again, as a sucker for punishment, I may go and open the nets for a short while and see what happens....

﻿ ﻿
Finally, my thanks to my good friend and former co-conspiritor at the now defunct Ausable Bird Observatory, Peter Fearon, for plugging this blog! In return, I thoroughly recommend you visit his blog, which is highly entertaining, and very informative, and contains many links to other blog sites all over the U.K., and further afield. Well worth the visit! You will find the link on this site....look for Scouseringer!
Posted by Kevin at 5:22 AM

Visitors to this page 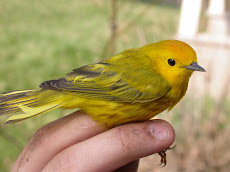